While The story above seems unlikely there are placer gold deposits in the glaciated upper Midwestern states including Minnesota. This post will help you understand what to look for and how to use public information to help you pick probable locations. The goal is not to tell you exactly where to look because there are already good information sources for that.   Minnesota GPAA is surprisingly active and they often provide exact locations and organize outings to go search for placer deposits.

The second reason is that Minnesota has relatively restrictive laws regarding what equipment is allowed to be used.  Technically you are really only allowed to use a shovel and a pan, and the description of what kind of damage to the stream or lake is anything that could be caused by swimming or wading. From what I have seen you can probably get away with using a sluice box, but is technically illegal.  If working in a populated area or a group you should follow the rules. Official rules are described in Minnesota’s recreational geology pdf available here.

Minnesota has been subject to several gold rushes throughout history.

4. Springville (1894)  –> Official information  [Rush-Hard Rock] (Supposedly a hoax but placers are known in the area)

Where did the gold in Minnesota come from?  Northern Minnesota sits on the edge of the Canadian Shield which is a Craton.  Greenstone belts are common along the edge of cratons and are responsible for a good portion of all of the gold mined in the world.  Your eyes started to glass over after reading those terms so we will look at some maps. If you want to know about the terms above feel free to click the links for a little light reading.  🙂

The following map is current as of September 2012 and show just how common gold bearing rocks are across the areas of Northern Minnesota and Ontario. In the past mining equipment had a difficult time dealing with the hard rocks up North, but modern technology and high gold prices have reignited corporate interest in looking for metals. Glaciers on the other hand had no problem cutting into the hard rocks up north and scattered their remains across the Midwest. 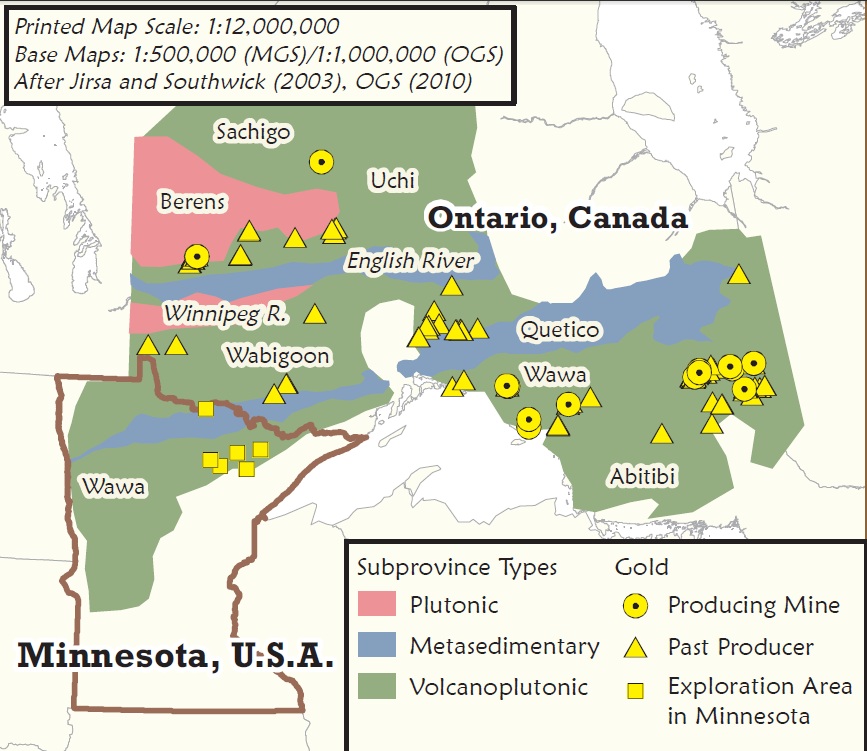 While multiple glacial events have occurred the general ice flow paths of the most recent are represented below. It is possible that sediments from other glacial periods would have carried sediments along other flow paths, but if you are searching inside the white area it is a good bet that your sediment will have come from the direction indicated. Minnesota’s glacial advances are clearly explained at the following site. (including sediment descriptions and additional maps) https://www.dnr.state.mn.us/snas/naturalhistory.html

If you live in an area represented by the James or Des Moines Lobe you may be thinking your search is over.  You would be wrong.  Gold is where you find it, and time is always on the side of the gold to travel.  Pre-glacial rivers flowed North into Hudson Bay. There was no Mississippi or Missouri river as we know them today. If you prospect in those lobes your gold source will likely have its origin in black hills or rocky mountains. Ancient river beds are exposed in a few areas of North Dakota and sporadically across Eastern South Dakota. The ancient river beds are conglomerates that survived glaciation. 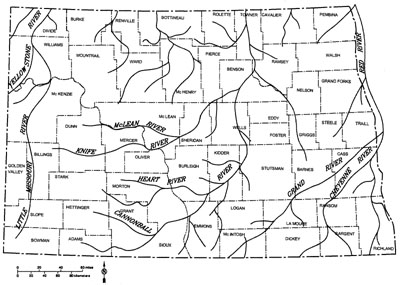 The Upper Midwest is not known for its topography.  Streams are mostly slow and dull, but that was not always the case.  When the glaciers were melting some of the rivers were huge and flowing rapidly.  Combined with the sediment load that the glaciers accumulated in Canada some of the rivers would have been good candidates for placer deposits.  Google earth is a free mapping tool that anyone can use, or use google maps by turning on “terrain.”  If the valley is much to large and steep to be created by the modern river in it’s place then a glacier or glacial lake was probably dumping water into the river at some point.  Examples (google maps turn on terrain) –>One 46.470734,-91.610899   Two 47.779655,-90.28827 (not open to prospecting)  Three 46.041067,-93.984289.

Eskers are streams that were contained within or on top of the glacier.  They would have had access to any of the sediment contained in the glacier and could also contain gold.  Eskers can be found the same way with google earth or maps. They appear to be elongated hills, and are often used as gravel pits.  If you can find an Esker that is a gravel pit and can get permission to be on it you may find gold.

Prospectors in Minnesota have a possibility of finding gold just about anywhere. However, the quantities will likely be low due to dilution of sediment in glacial material.  Streams in Minnesota are typically not prone to concentrating gold due to their low relief.  Look for areas where glacial out wash channels may have existed. Also, look for other glacial features that may have concentrated gold. Scrounge through historical records to try to get hints on where to look.  Utilize your local GPAA chapters for additional information. (The FB group might be better)

Geologic maps to help you in your Search: