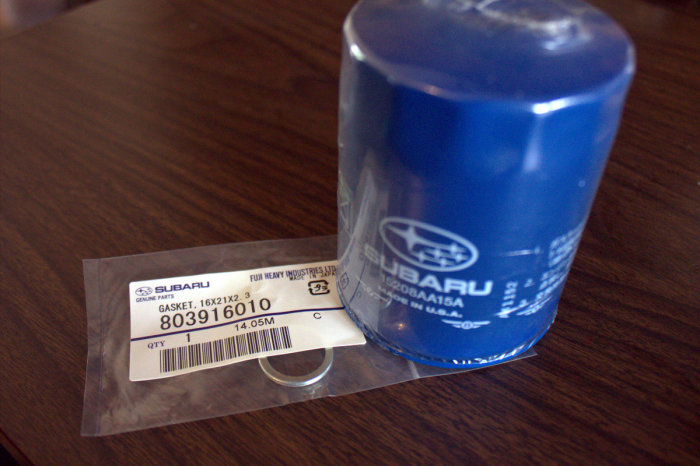 This is a quick tutorial with photos to help you change the oil on a 2014 Subaru Forester XT.   This tutorial should apply to any subaru using the 2L direct injection engine (FA20F engine).  In reality all of Subaru’s new engines are very similar so I expect everything will be the same. I’ll try to include any changes between new subarus, but try to verify torque specs and what not for your specific model.

This tutorial directly applies to the following models: (Probably works for most new Subarus)

Warm up your car to normal operating temperature.  You do not change the oil on a car when it is cold.

Drive your car up on ramps and place your oil drip pan under the car.

With the forester you will probably have enough room to work under the car without driving it up on ramp or jacking it up.  (I’m nearly 250 and I can get under it.) For the WRX you will need to jack it up or use ramps…. or use a curb…. 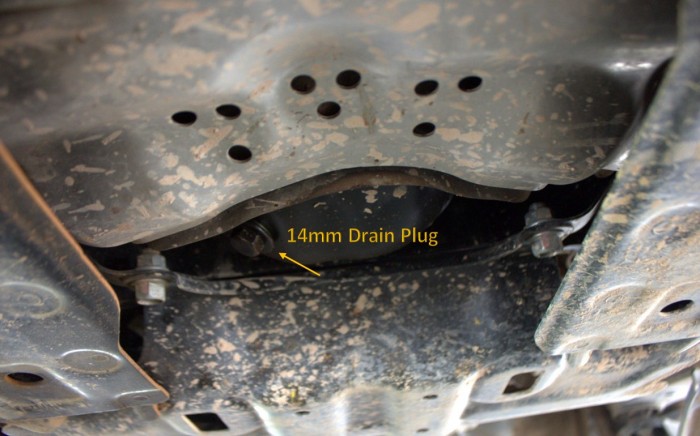 Place your drip pan and loosen the drain plug. I usually wad up a paper towel and back it out by hand once I have it loose.  (Less messy once you get the hang of it.)

Note: If you drove your forester up on ramps the oil has a long way to fall and may splash out of the pan if it is shallow.

If I’m not in a hurry I usually let it drain for 20 minutes or more.

Clean dirt and dust out of the oil catch cup around the filter. A damp cloth works well.  Be careful the edge of the cup is very sharp.

Remove the oil filter.  The filter uses a Size “B” Cup.  As with any car make sure the rubber gasket stays with the filter.  If you ever stack two rubber gaskets you will have a mess to deal with.

Rub oil around the rubber gasket on the new oil filter.

Install the new filter.  You will snug it up just past hand tight if you have the “B” Socket Cup.  Hand tight is probably OK if you don’t have it, but good luck getting it off.  The cups are about $5 at your local auto parts store.

Reinsert the drain plug with a new crush ring. (Some people reuse the crush rings, but they tend to drip if you don’t use a new one)

If you don’t have a torque wrench… You tighten it up until its tight. You will feel the crush ring collapse a little and then just go a slight bit past that point. Worst thing to do is over tighten it and start stripping out the threads in the oil pan. If you see that it is leaking after you do the job it is a quick deal to slide back under the car and give  it a tap to tighten it up.

Pour in the synthetic oil of your choice.

I usually run Pennzoil Ultra Euro L | Pennzoil Ultra |or Pennzoil premium. <–Links are provided to the best priced stuff I could find.  I have been running the Euro L lately.

Look over your work and pull the oil pan out from under the car if you have not already done so.

Start the car with the hood open and make sure every thing is as it should be.

Most of our cars came with a black Roki Japanese filter 15208AA160 which has been proven to be superior to the blue Honeywell made 15208AA15A (feel free to look around your forum of choice lots of guys have cut them up).  As long as you car is under warranty you will want to exclusively run 15208AA15A.  Once you warranty runs out or you are willing to battle a little bit on warranty work you can switch to the filter of your choice (Technically they should have to prove that the oil filter caused a failure in order not to do warranty work on your car, but some dealers are shady).

In general, WIX oil filters are considered the best among Subaru enthusiasts.  The reason for the battle is that Subarus run a relatively high  bypass valve setting.  Most off the shelf filters will fit just like the original filter, but will likely have bypass valve settings between 5-15PSI.

Most subaru engines require filters that have bypass valves that are rated a little over 20 PSI (All turbo Models).  The original 15208AA160 filter had a bypass setting of ~23PSI.  The WIX 57055 has a bypass setting 27 PSI and an anti drain back valve to keep oil in the filter rather than letting it all drain back into the engine.

The 2015 WRX uses 15208AA170 as the oil filter which is a little wider and shorter to fit under the WRX hood.  Some of the Forester XT guys have decided to run these filters as well. (I’m sticking with the 15A version for now)

Pennzoil Ultra (PU)  is probably the most sought after synthetic motor oil for the Forester XT and other F Series Subaru Engines.  I’ve been running it for the first three oil changes in my forester XT and it does appear to be good oil for turbo subarus.  (It is probably worth noting they just changed the formula.  It’s possible the new formula will not be as good)

I have not noticed any significant consumption and from what I can see my engine is staying clean as advertised.

I avoid Mobile 1 products for Subarus, as my WRX thought it tasted like candy. Other oils like Rotella T6 survived much better.

If you feel like getting into the madness just go on some of the subaru web forums.

Updated a little info and added some links to the products based on part number.

Took some supplemental video while doing my oil change today. I will be posting links or incorporating those into this post sometime soon.

I installed the Fumoto valve.  I will eventually do a bit of a review on that.  I think I probably drive gravel more than most people so it will be interesting to see how it holds up.